SECTION 1: HOW BLUE LIGHT AFFECTS THE EYE AND BODY / CHAPTER 3

By William B. Trattler, MD and Elise Kramer, OD

At its simplest, digital eye strain is eye and vision-related, caused by spending extended periods of time on computers, tablets, smart phones, or gaming consoles.

There is a good correlation between the number of digital devices someone owns and the amount of time spent using them. In some cases, extensive daily use is common (spending 8+ hours on a computer at work, then another few on a tablet or smartphone or gaming consoles during “off” time).1 Further, digital device use has broken all age barriers—grandparents use their devices to communicate with grandchildren, and younger people use tablets to read or play games. Even preschool children regularly use digital devices.

With this increasing reliance upon digital devices comes an increasing percentage of people with vision complaints directly related to their digital device use. Complaints typically fall into two categories: vision problems (where the screen becomes more difficult to focus on), and abnormal sensations (i.e., dry eye). For some, these symptoms will be transient in nature but for others, symptoms will be frequent and persistent to the point of seeking medical attention. The above phenomenon has been a recognized health issue for the past twenty years. Originally called “computer vision syndrome,” the introduction and rapid acceptance of digital devices has broadened the overall category to be renamed “digital eye strain.”1

At its simplest, digital eye strain is eye and vision-related, caused by spending extended periods of time on computers, tablets, smart phones, or gaming consoles. In more technical terminology, digital eye strain “is a condition characterized by visual disturbance and/or ocular discomfort related to the use of digital devices and resulting from a range of stresses on the ocular system, including glare, defocus, accommodation dysfunction, fixation disparity, dryness, fatigue and discomfort.”2

Digital eye strain is now being considered an emerging public health issue, and its effect on vision cannot be overlooked.2

Anatomy of the Eye

To understand how digital eye strain affects vision, a basic understanding of the anatomy of the eye is warranted. The eye is responsible for the detection of visible light; for humans that range is about 400 to 700 nm. This organ must be able to address all the optical requirements of imaging, while concurrently being able to readjust and optimize the parameters across the entire range of visible light and ideally at any distance.3 And it does so with only about one-sixth exposed and easily seen (the remainder is protected by orbital sockets in the skull).

As shown in Figure 3-1, the retina is the innermost layer of the eye, and lines three quarters of the back of the eye. It is where the visual pathway originates, and is often compared to a camera. The retina is considered the “photographic film of the eye that converts light into electrical energy for transmission to the brain.”4 There are two key components within the retina that are directly responsible for vision: the macula and the fovea. The macula is in the exact center of the retina, and is the center of all human vision. The fovea is a small depression in the center of the macula that contains highly sensitive photoreceptors (rods and cones). The fovea is the area of highest visual acuity or resolution and is responsible for the sharpness of vision.3 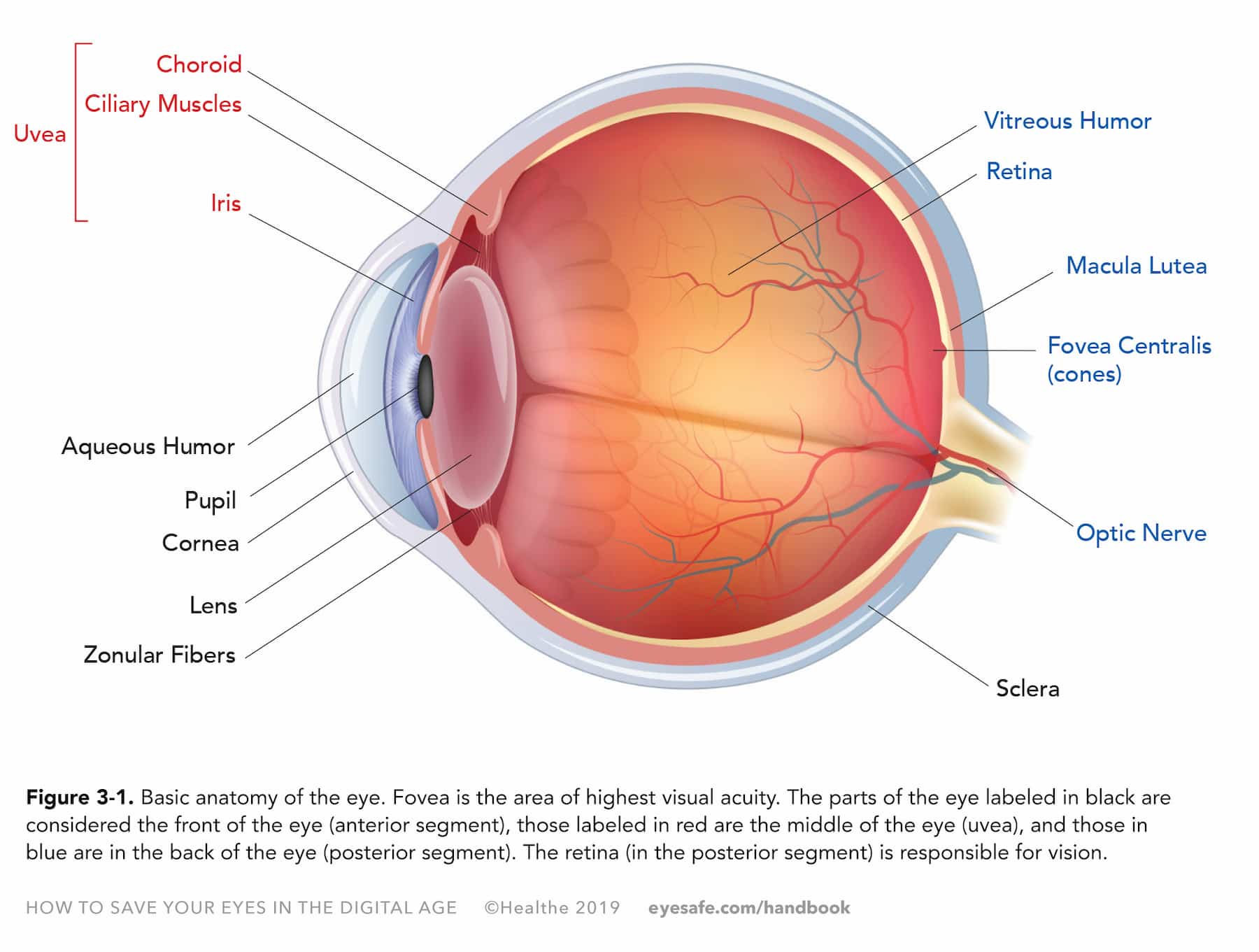 In 2016, The Vision Council released its Eyes Overexposed: The Digital Device Dilemma report on the digital habits of more than 10,000 U.S. adults.5
Among the findings:

Digital eye strain complaints are more common in those using two or more devices simultaneously (and in that group, 75% complain about digital eye strain). Plus, because today’s digital devices are often used “on the go,” people tend to blink less when using digital devices, which in turn results in dry, irritated eyes.

Symptoms of digital eye strain can include any of the following: headaches, blurred vision, dry eyes, “tired eyes,” and pain in the neck and shoulders. People who often squint while looking at a digital device (most often, a computer screen) also tend to complain of digital eye strain. While squinting helps facilitate concentration and makes it easier to see the screen clearly (possibly also minimizing the glare associated with these screens), it also reduces the blink rate.

To date, the best strategy to treat digital eye strain is to prevent its occurrence altogether.2

Digital Eye Strain and the Role of Digital Displays

Numerous activities that used to be done at a distance are now being done on digital devices, including watching movies, playing games, finding recipes, checking weather, getting directions, online shopping, setting timers (alarm clocks), etc. Although the general rule of thumb is that the healthiest distance for digital devices is about 20-40 inches away from your eyes (about an arms’ length), oftentimes the distance is much, much closer.

Most people in their 40s and 50s will already have a visual condition called presbyopia that affects intermediate vision (as the need for reading glasses becomes more prevalent, documents on a computer need to be larger in order to be read, etc.). People with presbyopia have additional visual stress when looking at digital devices, as they often do not attempt to correct this intermediate vision, or they undercorrect by using readers that do not offer the proper magnification.6

Limiting the amount of time spent with digital devices can also reduce digital eye strain, yet The Vision Council found one-third of Americans do not attempt to limit their exposure, and more than 90% do not discuss their device use with an eye care practitioner.7 There is some research that suggests the blue light emitted from these devices may be an underlying cause of digital eye strain as well; a sepia background rather than the conventional white background of these devices seemed to reduce subjective complaints about eye strain.

William B. Trattler, MD is a refractive, corneal and cataract eye surgeon at the Center For Excellence In Eye Care, who lectures extensively across the US. Dr. Trattler specializes in anterior segment surgery, ranging from PRK and LASIK, Corneal Collagen Crosslinking, Laser Cataract Surgery, pterygium surgery, and other surgical procedures. 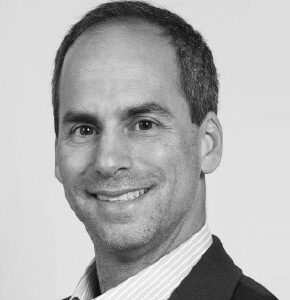 Elise Kramer, OD specializes in ocular surface disease and regular and specialty contact lens fitting. Her Doctorate degree was awarded in Optometry from the Université de Montréal. Dr. Kramer is a fellow of the Scleral Lens Education Society (SLS) and now serves as the Public Education Chair Elect for the SLS. Digital Eye Strain and Over-exposure to Blue Light can lead to:

NEXT: CHAPTER 4
BACK TO TABLE OF CONTENTS