SECTION 1: HOW BLUE LIGHT AFFECTS THE EYE AND BODY / CHAPTER 4

By Mitchell A. Jackson, MD and Melissa Bollinger, OD

Today’s digital generation is sleeping less than previous generations, and blue light in excess of normal daytime dosages may be a cause.

Over the past few decades we have found important links between blue light and the human sleep cycle, otherwise known as circadian rhythm. Even though visible light can reset our biological clock, blue light is the most effective at it with the highest efficiency. A growing body of evidence shows that the disruption of the circadian rhythm is linked to various diseases such as obesity, depression and possibly cancer. The ipRGCs are primarily responsible for non-image forming signal transmission to the brain. They regulate pupil dilation and are actors on the circadian system, by transmitting to the suprachiasmatic nucleus SCN (a small group of hypothalamic nerve cells), which is our central clock. This clock synchronizes other clocks for the metabolism including those of liver, heart and kidney functions. It controls the circadian physiology by signaling to the pineal gland the secretion or suppression of melatonin, the so-called sleep hormone that controls our sleeping and waking phases (Figure 4-2).1 Blue light between 460 and 480 nm, through the stimulation of SCN cells and the suppression of the melatonin production, is responsible for alertness, memory, attention span, reaction times, learning ability and cognitive performance.2 This is a natural phenomenon; this blue component of the sunlight is primordial for our wellness through an optimized circadian rhythm. See Figure 4-3. 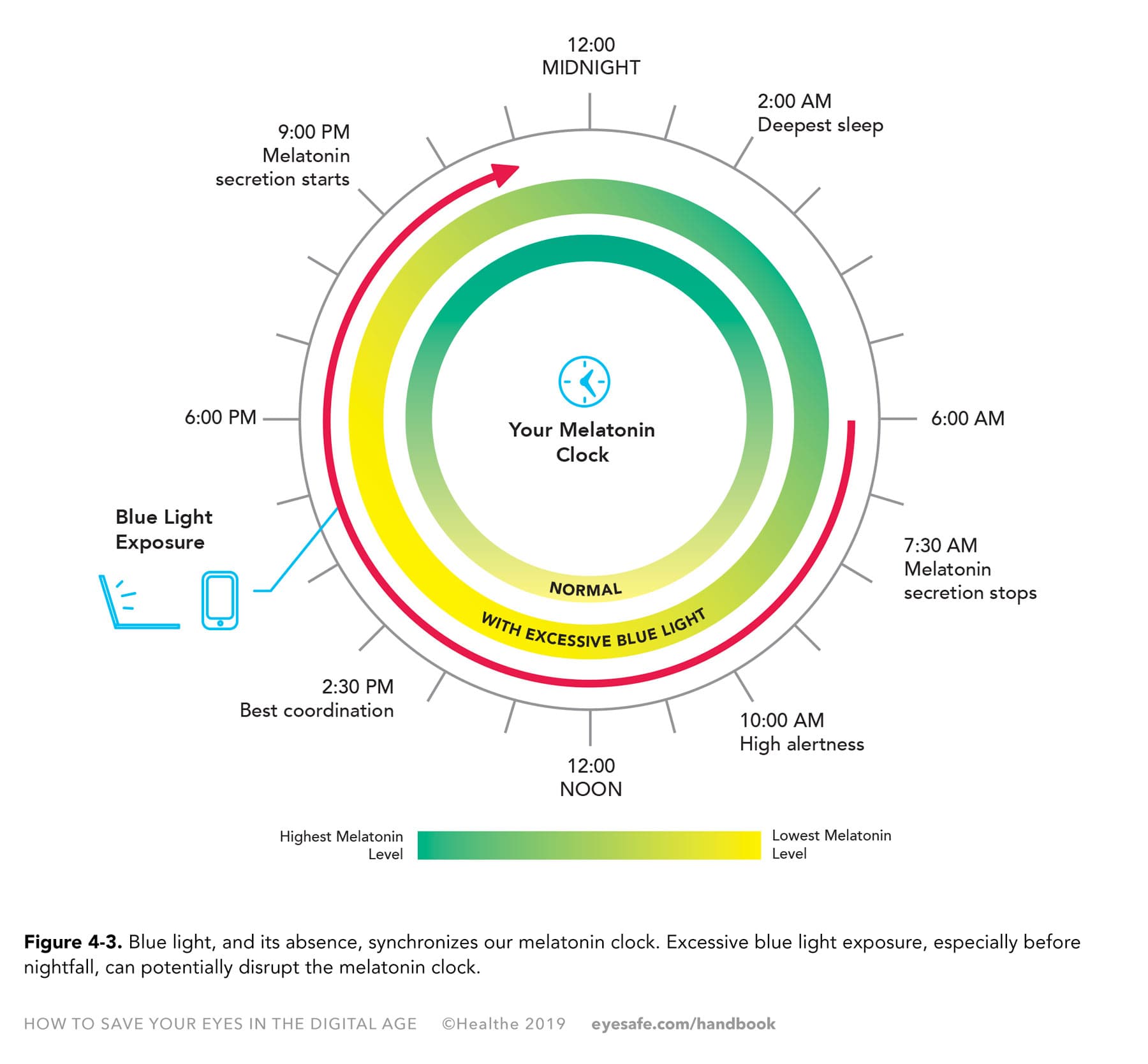 With LED lighting technology, our eyes have been more and more exposed to light and moreover to high energy blue light. LEDs nowadays are used in practically anything requiring light, from the outside street lights, offices lightings, to light in cars, toys and everyday tools such as computer screens, tablets and smartphones.

Excessive exposure to digital displays, especially at night or just before sleep time, can potentially desynchronize circadian rhythm. Several studies have shown a decrease in sleep quality and late bedtimes in adolescents and adults following the use of digital technology at night.3 Other studies are more measured with their analysis.4 Nonetheless, with the increasing presence of technology in our life, our daily and nocturnal exposure to blue light is at an incomparable level.

The influence of blue light on the circadian rhythm remains under scrutiny. Nonetheless, a desynchronization of the circadian rhythm can lead to numerous symptoms having potent health effects, such as persistent fatigue, poor appetite and sleep disorders which could lead to chronic insomnia, mood disorders and potential depression.5 According to these health experts, exposure to artificial light, enriched with blue light, should be considered on the same level as endocrine disruptors.

Blue light has powerful effect on circadian rhythm, which is why it is used in some types of therapy. It is used in chronotherapy for example, in the treatment of traumatic injuries such as post-concussion treatment, either by blocking blue light or by exposing subjects to blue light, in order to reset or reinforce the circadian rhythm, and help the brain to recover and improve sleep and delayed memory after injuries. Equally these methods have been shown to be useful in the treatments of sleep disorders and mania.

The National Aeronautics and Space Administration (NASA) has mounted several studies that center on blue light.6 Astronauts who work on the International Space Station can run into sleep issues because the space station circles the Earth every 90 minutes, disrupting the circadian cycle. One study used blue light therapy instead of caffeine and sleep medications to synchronize astronaut sleep cycles. Delivering this light by enhancing blue wavelengths in white-appearing light also allowed the crew to see well when they are working. Before bedtime, decreasing the blue content and intensity of the light promoted sleepiness, improving sleep and reducing suppression of the hormone melatonin, the brain’s biochemical signal of darkness. This type of lighting manipulation shows strong potential as a safe, non-pharmacological way to counter disruption of circadian rhythm and the problems that it can create during spaceflight. The incidence of US children getting less than eight hours of sleep a night rose 33 percent over a five year time span starting in 2006.8 It is clear from numerous adolescent sleep studies that smart phone use for gaming, social interaction and study at night contributes to sleepiness during the next day as well as mood changes.

Guidance from a Harvard Medical School study is to avoid blue light two hours before bedtime.8 School age children would benefit from staying off of their tablets and smart phones before bedtime. Of course, as children get older that is harder to enforce.

Mitchell A. Jackson, MD is a board-certified ophthalmologist specializing in cataract and refractive surgery with 27 years of private practice. He received his medical degree from Chicago Medical School. Dr. Jackson is the Founder/CEO of Jacksoneye and is also a clinical assistant at the University of Chicago Hospitals. Melissa Bollinger, OD is an optometrist with 25 years of clinical experience. She earned her optometric degree from Ohio State University. She served as an adjunct clinical professor at Ohio State University College of Optometry for 8 years, and has lectured on various ocular health conditions. She currently practices at Jacksoneye in Lake Villa, Illinois. NEXT: CHAPTER 5
BACK TO TABLE OF CONTENTS 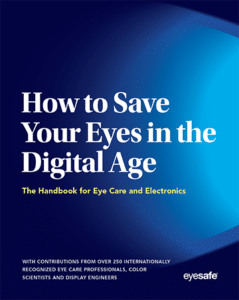