SECTION 1: HOW BLUE LIGHT AFFECTS THE EYE AND BODY / CHAPTER 1

A Close Look at Our Eyes

Our eyes are our dominant sensory organs.

The eye is a ball separated into two chambers by the iris and crystalline lens (Figure 1-1). The outer surface, the sclera is white except for its anterior clear part, the cornea, delimiting, with the iris and crystalline lens, the anterior chamber filled with a clear fluid called the aqueous humor. The posterior chamber is filled with a more viscous substance called the vitreous humor which helps to regulate the eye pressure and its shape. Lining the inside of the sclera, in the posterior chamber, is the choroid, a vascular layer, containing connective tissues. And inside of the posterior chamber, against the choroid is the retina, formed during the fetal development of the brain, which contains the eye’s sensory cells and photoreceptors.1 The photoreceptors of the retina are rods and cones. There are about 120 million rods in an eye, responsible for the scotopic vision, or vision in low level of light. Rods are sensitive to shape and movements, but are not sensitive to colors. Cones, located in the macula, are the photoreceptors sensitive to colors. There are about 6 million of three different types of cones with sensitivity to blue, green, and red, and of different abundance. There are more red cones than green and blue cones. The distribution of cones in the macula and fovea also differ as a function of the wavelengths they absorb.

Along with rods and cones, a third type of photoreceptors are present within the retina. They are the intrinsically photosensitive retinal ganglion cells (ipRGCs). Photosensitive because of the melanopsin they contain, a light sensitive protein, ipRGCs are involved in non-image forming signal transmissions to the brain. They help regulate circadian rhythm, pupil constriction, mood, alertness and more body functions.

Color sensing and visual perception occurs when light in the 380–780 nm range hits the retina. Ultraviolet and infrared wavelengths are not absorbed by the retina, but by the outer layers of your eyes , the cornea and lens. In a normal eye, light enters the eyes through the cornea, and passes through the pupil. The iris around the pupil regulates the amount of light entering the eye by getting bigger or smaller. As the light hits the lens, the zonular fibers and ciliary muscles change the shape of the lens in order to focus and maintain the light on the retina where the photoreceptors are located. Cones and rods convert the light into electrical impulses transferred by the optic nerve to the brain, which interprets the signals as an image.

Colors are defined by their wavelength and frequency. Different wavelengths are perceived by the eye as different colors. Rods and cones contain photopigments made up of a protein component (opsin) and a chromophore (retinal). The opsins of the rods and cones are different and make rods and the three types of cones sensitive to different ranges of light wavelengths. See Figure 1-2. Upon photoexcitation, the retinal contained in the photoreceptors changes, triggering a cascade of reactions as part of the visual signal. 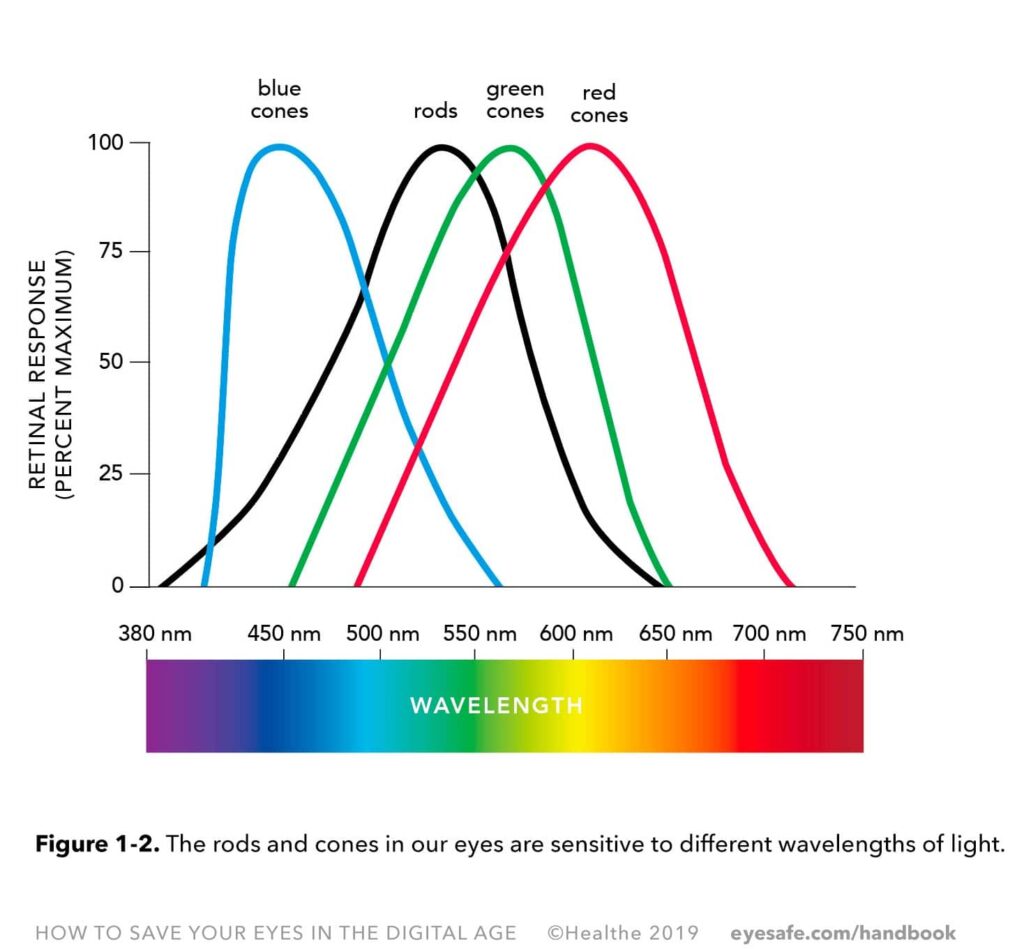 With the cones centered on the wavelengths corresponding to blue, green and red, the brain interprets the signals sent by the overlap of different cones into various colors, with white being interpreted from the stimulation of the three cones and yellow for example, from the stimulation of green and red cones. Conditions such as color blindness are due to genetic mutations causing abnormalities of the cone pigments.

20/20 vision is a term used to express normal visual acuity (the clarity or sharpness of vision) measured at a distance of 20 feet. If you have 20/20 vision, you can see clearly at 20 feet what should normally be seen at that distance.

The cornea facilitates the focusing of an image on the retina. Adjustments for distance are realized through a change in the lens shape, which is called accommodation. The process of accommodation is carried out by the contraction of the ciliary muscles and the zonular fibers connecting this muscle to the lens.

The shape of the eyeball, along with the focusing power of the crystallin lens and the cornea, plays a role in projecting a crisp image on the retina. An eyeball too long or too short will change the place where the image focuses, before or after the retina, hence causing refractive errors such as nearsightedness (myopia) or farsightedness (hyperopia). Other vision defects such as astigmatism can occur when either the lens or the cornea does not have an optimal spherical surface.

With aging the lens stiffens and leads to a loss of accommodation manifested by presbyopia. Prespyopia is a condition where it is increasingly difficult to focus on near objects, despite corrective lenses. Aging can also lead to an opacity of the crystalline lens, a common eye disorder called cataract.

Other deteriorations of the eye include glaucoma, a group of eye diseases characterized by an increase of pressure within the eyeball.2-3 The buildup of pressure converges on the optic nerve, the weakest point of the sclera where the nerve leaves the eye. This can lead to the death of the retinal cells and degeneration of the nerve fibers, finally resulting in permanent vision loss.

Another cause of vision loss is macular degeneration.4 It is caused by the damage of cells and photoreceptors located on the macula, where the vision is focused and characterized by the presence of large drusen (extracellular material) and pigmentary abnormalities in the macula. There are two types of macular degeneration, wet and dry, and several stages of development of the disease. The specific factors of macular degeneration are still to be completely understood even though genetics, race, age and a long-term exposure to sunlight and in particular the action of the blue component of the light had been evidenced as causative factors.

According to the World Health Organization (WHO), upwards of 1.3 billion people worldwide have some sort of vision problem.5 The WHO report indicates that 80% of all vision problems are preventable.

The leading causes of vision problems globally include:

A National Institute of Health study estimates that ninety million adults over forty years of age in the United States experience vision problems. Almost everyone has some degree of presbyopia by this age.6

The NIH summarized some findings from eye care professions, and projects some alarming trends, as seen in Table 1-1. Some of this is due to aging populations, but others appear to be caused by external factors.

Blue light is a part of the visible light spectrum that has been shown to contribute to digital eye strain. High-energy blue light from device screens combined with the amount of time we use devices may cause overexposure, and affect our eye health. As shown in Figure 1-3, our eyes transmit various bands of visible light differently as we age. Young children do not filter as much blue light, for example, as older children. Older adults transmit less. Chad Dockter, OD attended the University of Minnesota from 1985-1989 to study Biology. He then attended Illinois College of Optometry in Chicago in 1989 and graduated in 1993. At Illinois College of Optometry he completed an externship at Low Vision Resources in Minneapolis. Specialty areas include family eye care, refractive surgery and pediatrics. 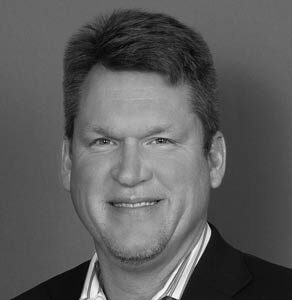 Chris Freed, OD graduated from Michigan State University in 1993 with a major in biology and a minor in ecology. Dr. Freed graduated from Illinois College of Optometry in 1997. 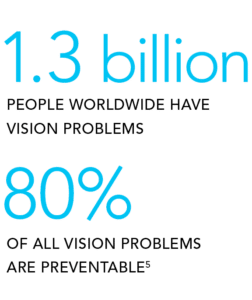 NEXT: CHAPTER 2
BACK TO TABLE OF CONTENTS